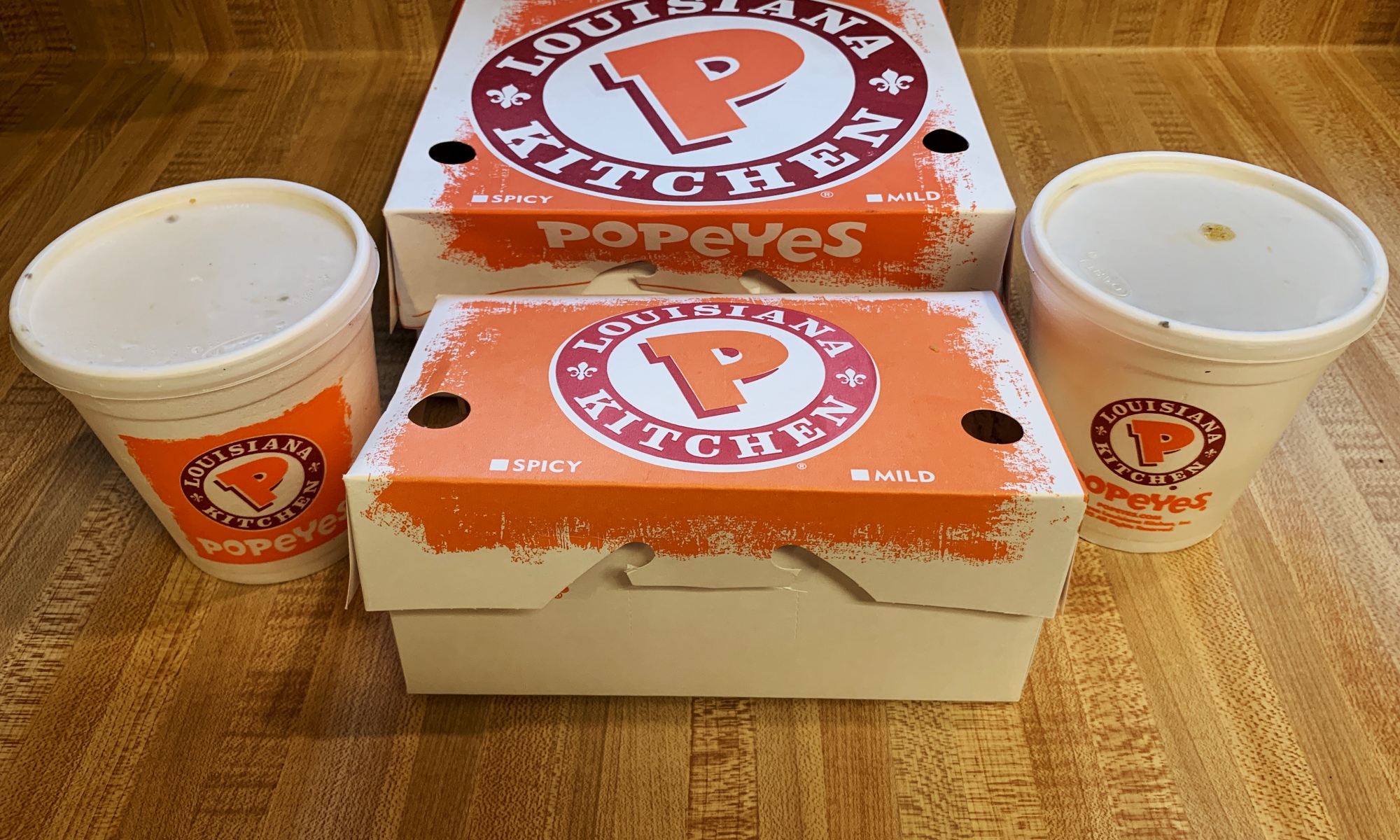 Late Friday afternoons are the The Tempting Times. After a week’s worth of whores’ shit all I can think about is whatever thing I’ve wanted but denied myself in the pursuit of being “good.” This week it was Popeye’s fried chicken.

I left work 15 minutes early to get a head start on traffic. I was still suffering flashes of sitting in traffic from the 2 hour nightmare the day before.

(there was an emergency repair that necessitated blocking all but one lane of the six lane highway.)

Luckily traffic was light. Better still, I was early enough to get on the tollway before it switched over to HOV. I made it out to my side of town in 15 minutes. Even more surprising, the trip to Popeyes was light. Normally that area is backed up with traffic, even in “off” hours.

At Popeyes, I was the only one in line. Amazing! I drove up, placed my order, and pulled around lickity split.

“I’m sorry, sir. We just dropped a batch of chicken. It will be 15 minutes or so before it’s done.”

“Uhm,” I started, but before my negativity could kick in I remembered they had spicy. “Do you have the spicy.”

They didn’t. Well, they did, but they only had a couple breasts and I had ordered an ten piece meal so Vicky could have some too.

Defeated, I groaned, “Ugh. No thanks,” and drove off.

Now, I’m ashamed to admit this, but I have an extremely low tolerance for upset once I’ve got my heart set on something. I’m a brat that goes from having a wonderful Friday afternoon to full on meltdown in the time it takes to get from the window at Popeyes to the parking lot exit out to the street.

I spit expletives like a machine gun as I pulled out. I would have just gone to another fried chicken place, if there was one within ten miles. We have three fucking Sonics within a couple miles radius, but only one fried chicken place in the surrounding ten.

Suddenly all the fucking traffic had come out of the woodwork. I had got through all the lights in one quick go getting there, now it took four light cycles to get back to heading home. When I got to the feeder my Popeyes chicken entitlement had morphed into full-blown road rage. I punched it to get around the douche going the SPEED LIMIT in order to get. . . somewhere, anywhere, ahead of that prick.

When I was safely ahead of him, and had had a reassuring head shake of disgust at his expense, I started to slow down. Not soon enough, though, to avoid getting radared by a police officer that was waiting on a side road. My citation read “Alleged Speed: 75 Speed Limit: 50.”

The plan had been to go straight home to enjoy my food, but since that wasn’t happening, I thought I might as well go by the grocery store and pick up a couple things. Save Vicky the trip on her way home. I deliberately took deep breaths, drove in one lane, the slowest, in order to accept what had happened and hopefully calm down a bit.

At the grocery store I parked at the farthest end of the lane to give myself time to walk. Walking tends to be calming, even when its mid afternoon and 104 degrees outside. I got in, got what I needed, and got into the self check out line despite my dislike of the whole idea. I scanned my items, bagged them, tapped pay and. . . My wallet was still in my car because I had pulled it out to give my driver’s license to the police officer.

I called for the attendant to void the transaction so I could go get my wallet. Of course, three other people had called for her ahead of me, and there was a line four people deep behind me.

JE-ZUZ FUCKING CHRIST ON HIS THRONE!

I retrieved my wallet from my car and got back into line to check myself out again.

When I finally pulled into my driveway, it was an hour and fifteen minutes from when I had left work, later than I usually am when I leave work on time. I had no chicken, but I was sweaty and had a citation for speeding.

As I waited for the garage door to open I heard the Popeyes employee, “We just dropped a batch of chicken. It will be 15 minutes or so before it’s done.” It would have been done by now and I would have been eating it if

(we whould have just waited for the fucking chicken.)

Not that I deserved it, but when my wife heard about my trip home (i.e. listened to me whine out it), she ordered Popeyes from another restaurant and had it delivered by Door Dash.

Ugh. What an expensive and painful reminder I am unwarrantedly blessed.

One Reply to “Journaling June: Just Wait for the Chicken”

This site uses Akismet to reduce spam. Learn how your comment data is processed.